Skip to content
This post contains affiliate links, and we will be compensated if you make a purchase after clicking on our links.
By Tonya Wilhelm | Last Updated: October 28, 2021 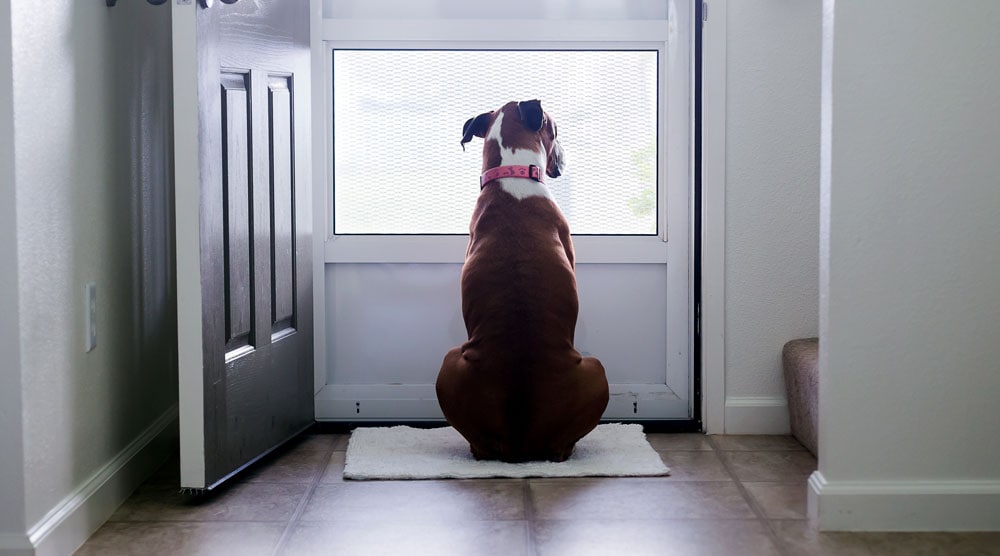 Does your dog bark at the front door when someone knocks or rings the doorbell?

If you answered yes, you’re not alone. This is a very typical and normal dog behavior.

Barking, in general, is a natural way for a dog to communicate. In this scenario, he’s alerting his family that a stranger is about to enter the home.

In this training guide, I will go over some of the reasons why dogs bark at the door, and offer solutions for stopping or reducing this behavior.

Why Do Dogs Bark?

It’s a pretty cut-and-dry answer, but a dog who barks is trying to communicate something. The confusing part is that two dogs could react to the same trigger for different reasons.

Dog “Number One,” for example, may be anxious that a stranger is about to enter his home and telling the intruder to hit the road. He also may be trying to alert his human family that someone is about to enter, to come and provide some backup.

Dog “Number Two” could be excited and happy that a new stranger is behind the door to offer head scratches, belly rubs, and treats. This dog is eagerly barking out of excitement and enthusiasm.

Why Do Dogs Bark at the Door?

The key to reducing your dog’s barking is to unlock the reason why your dog is reacting to the door. The bark is a symptom of the dog’s emotions, not the problem itself. It’s the trigger you need to address.

Let’s look at dog “Number One,” who is anxious when strangers enter his home. Remember, barking is a symptom of his anxiety, therefore, it’s the dog’s anxiety to strangers that needs to be addressed, not his barking. If this dog is not anxious about a stranger entering, his barking will stop or greatly decrease. It is critical to address your dog’s anxiety with a professional, as it’s unhealthy for a dog to live in a constant state of stress and anxiety.

Dog “Number Two” is overly excited when new people enter his home. He’s bounding and barking for joy and attention from the unknown person behind the door. I often think of these dogs like kids headed to an amusement park. They are so excited they are screaming, running, jumping…and often not in full control of their emotions.

How to Stop Your Dog Barking at the Door (5 Steps)

The following process uses desensitisation and counter-conditioning to teach a dog not to bark at the front door. These are powerful concepts in dog training. Once you understand them, they can be applied to a variety of behavioural problems.

This process is primarily for dogs that are feeling stressed and barking to alert the family. A dog that’s over-excited when greeting people may need a slightly different approach.

We will be changing your dog’s trigger from something negative, which causes stressful emotions and barking, to something more positive. You don’t have to be a magician to achieve this response, and it’s not as hard as you may think.

Now you have a list of your dog’s barking triggers, we need to ensure they do not “go off” when you’re not in training mode. For some people, this can be the most difficult part of the training program, but it is also the most crucial – and here’s why.

If you’re actively working on teaching your dog a new response to the doorbell, and a stranger rings the bell when you’re not ready or home, your dog will likely start barking and his training will regress. The goal in a good dog training program is to allow your dog to be successful all or most of the time. It’s important he is learning what you want from him, rather than reinforcing the behavior you’re trying to eliminate.

You know the saying, practice makes perfect? Well, if your dog is practicing the wrong thing, it’s impossible for him to learn what you want him to do.

How do you stop people from ringing or knocking on your front note? With a sign and tape.

Simply put a large piece of duct tape on your bell and a note by your door knocker that says, “Do not knock. Do not ring bell. Dog in training. Please call/text xxx-xxx-xxxx or leave package at the front door.”

Voila! The problem is almost always nipped in the butt right here. Even if you don’t have the time or energy to follow through with the training below, at least you put a Band-Aid on the problem and helped to eliminate some of your dog’s barking. You could also get an external letterbox, so the dog doesn’t have letters pushed into his home each day.

Remember that list you made in step #1? Now it’s time to focus on desensitizing and counter-conditioning (D&C) your pet to those triggers.

Desensitization is a technique that exposes your dog to his trigger/stimulus at such a low intensity that that he doesn’t respond. Over time, you gradually increase the difficulty of the stimulus until there is no response.

Counter-conditioning is classically conditioning the dog to link the trigger with a pleasant event, such as a treat reward. These two positive training techniques work best together, and can quickly transform the trigger from something negative to something positive.

Get Setup With Treats

It’s time to pull out the healthy-and-tasty dog treats. Personally, I like to use single ingredient treats such as 100% dehydrated or freeze dried meat.

There are a few reasons I head over to the meat. First, these treats are healthy, do not have any added ingredients, and can count towards a dog’s daily caloric needs (rather than just given as extra “treats.”) Second, dogs tend to think meat treats are amazing and rewarding, so are willing to do just about anything for a tasty bite.

Once you have your dog’s treat selection, ensure they are broken into small bites, about the size of a pea. You’re going to perform lots of rapid training sessions, so the smaller the treat, the better.

Next, go to the inside of your front door. With your dog following, do a light “two knock” on the door and immediately give your dog three treats in succession. Treat, treat, treat. The goal is to start teaching your dog that the knock equals treats.

Once your dog settles back down, repeat your light knock, followed by three treats. Continue this process five times.

What you should start to see is that your dog either stops barking at your knock, or at least settles quicker after your knocks. If after five trials he doesn’t seem to be settling, you need to lighten your knock and provide him with a bit more of a reward. Maybe it’s jackpot time and give him ten treats after each knock.

Now your dog is not barking at your knock, make the next knocks a bit louder then follow with your three treats.

Continue this process until you get to the point of doing a real knock on the inside of your door and your dog does not respond, only looks to you for the treats. This will likely take a few days to master.

You will want to gradually go through this process with all his triggers, including the doorbell.

A quick tip on the doorbell: change the chime! A lot of doorbells offer different chimes, and if your dog has not heard one of the chimes, sometimes you can start from scratch and quickly go through the training process.

Once your dog is reliably not barking at your knocks at the door, it’s time to enlist a friend or family member.

Ask your helper to do the light “2 knock” on the front door as you provide your dog with his three treat reward. It will take him a bit more time to settle down after this reward because now it’s a “strange” person. It’s a good idea that both you and your helper have phones, so you can text each other when to knock and when to wait. Once your dog has settled, text your helper to repeat the two knocks as you repeat the treats.

Just like your previous solo sessions, you’re going to continue this process until you get to the point of a normal knock at the front door, with your dog looking to you for his rewards. Don’t have your helper enter the front door after the knocks, even after your training session has ended. Instead, have them just enter via another door, or you and your dog go outside on leash and walk them inside.

When your dog gets to rock-star status at your guest knocking and/or ringing the doorbell without a negative response, you can start opening the door for your guest after they knock. Continue to reward your dog along the way and don’t overly greet your guest. Keep things chill and low-key.

You did it! It might have taken some time, but your dog is much calmer and in control over his emotions at the door. It’s important to still reward your dog in the beginning stages and to randomly reward him for his good behavior in the future to keep reinforcing his quieter response.

I hope this article has helped you understand why dogs bark at the door and how to prevent it. If you have any questions, please ask away in the comments below. 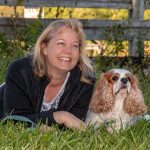 About The Author: Tonya Wilhelm

Tonya Wilhelm has been a dog training and cat care specialist for over two decades. She has traveled the US promoting positive ways of preventing and managing behavior issues with a holistic approach. Named one of the top ten dog trainers in the US, twice, she has helped thousands build happy relationships with their dogs with humane, positive training methods. She's authored several dog training books and offers phone/Skype training services. Her favorite pastime is traveling with her trusty companion, Dexter The Dog. Learn more about Tonya and Dexter on their blog at RaisingYourPetsNaturally.com