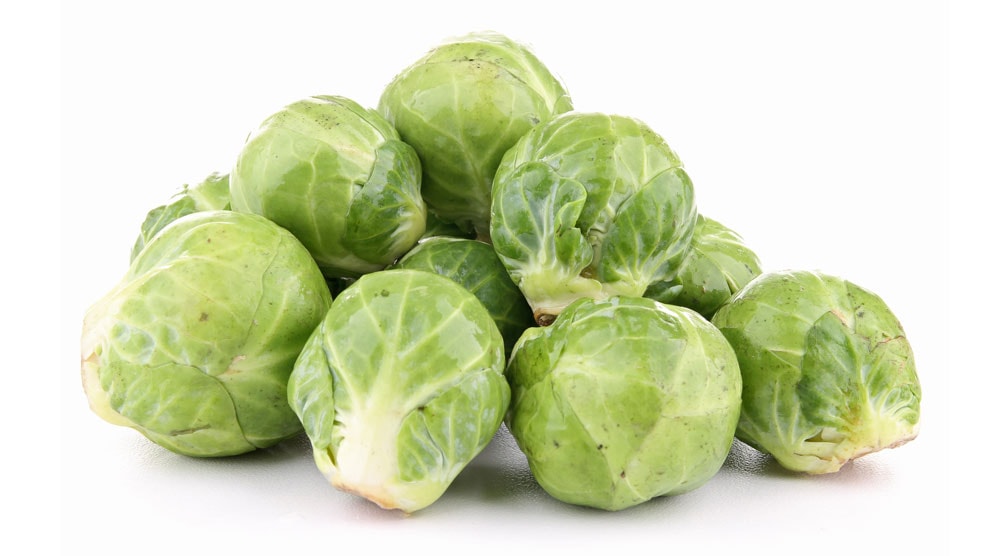 Brussels sprouts may not be to everyone’s taste, but there’s no doubting their nutritional benefits. Are brussels sprouts safe for dogs to eat though? Read on to find out more.

If you’re serving a Thanksgiving or Christmas meal, you might wonder if your dog can eat the leftover brussels sprouts.

The good news is that brussels sprouts are non-toxic to dogs. As long as the sprouts are cooked, not covered in other food, and given in moderation, your dog may benefit from the fibre and vitamin content.

Can Dogs Eat Brussels Sprouts (Both Cooked and Raw)?

That doesn’t mean your dog should eat unlimited quantities though. In fact, they should only be given as an occasional treat and in small amounts. Here’s why.

When you introduce brussels sprouts to your dog’s diet, it should be done slowly to check for signs of intolerance or allergies.

Although an allergy to sprouts would be rare, it’s still sensible to start with half a sprout at most. Then watch for several days to ensure your dog doesn’t show any signs of an allergic reaction.

Typically, allergies manifest on your dog’s skin and can cause stomach upsets. Look out for your dog scratching more than normal and make sure their skin isn’t inflamed or red. Serious reactions can also cause gastric problems and respiratory issues. If you notice any worrying symptoms, you should seek immediate advice from your vet.

You can then increase the amount if your dog doesn’t show any signs of a reaction. Giving your pet between one and three sprouts occasionally, depending on the size of your dog, is more than enough.

Note: If your dog has other known allergies or is sensitive to new foods, it’s best to consult with your vet before adding brussels sprouts to their diet.

Sprouts have a high fiber content, which is another reason they should only be given to dogs occasionally.

Although dietary fiber can be beneficial for your dog, too much can result in food passing through the digestive system too rapidly. This can cause side effects such as an uncomfortable build-up of gas, stomach upsets or diarrhea. It can even prevent nutrients from being fully absorbed.

Raw Sprouts Are Difficult to Digest

It’s best to steer clear of raw sprouts. The sugars found in raw cruciferous veggies can be particularly difficult to digest, and could lead to your dog feeling bloated and gassy.

Raw sprouts also contain thyroid inhibitors. These could be a problem if your dog has an underlying thyroid condition.

If you’ve ever eaten a portion of brussels sprouts, you’ll know they can cause an increase in flatulence.

This isn’t a medical problem, as it shows the digestive system is functioning properly. But be aware that your dog might be rather pongy after a Thanksgiving meal!

Are Brussels Sprouts Healthy for Dogs?

Just like humans, not all dogs enjoy the bitter taste of sprouts. If your pet likes them, however, sprouts can be a healthy food source with a variety of potential health benefits.

How Should Sprouts be Served to Dogs?

Brussel sprouts should always be cooked before giving them to your dog. But which is the best cooking method?

Steaming preserves the most nutrients. If you want to maximise the potential health benefits to your dog, it’s probably best to steam the sprouts.

Light boiling also preserves the nutrients, just be careful not to overcook them. Boiling for too long destroys a lot of the nutritional value and intensifies their bitter flavor.

Make sure you wash the sprouts to remove any harmful pesticides. You should also cut off the hard stem and slice the sprout in half, or even smaller for toy breed dogs, to prevent it becoming a choking hazard.

Avoid giving your dog brussels sprouts that have been cooked with salt or added butter. Salt can cause dehydration and is a particular problem for dogs with renal issues. Too much butter can cause weight gain, pancreatitis, and stomach upsets. Many dogs are also lactose intolerant.

Additionally, be aware that sprouts are often roasted with seasoning or alongside onion or garlic. Both of these vegetables are toxic for dogs, so you should only feed your pet plain sprouts.

If your dog enjoys this bitter-tasting vegetable, then eating a brussels sprout or two won’t do them any harm. Sprouts are rich in fiber and contain lots of beneficial vitamins and antioxidants.

Brussels sprouts shouldn’t be part of your dog’s daily diet though. They should also only be given to a dog if they are cooked and don’t have any seasoning.