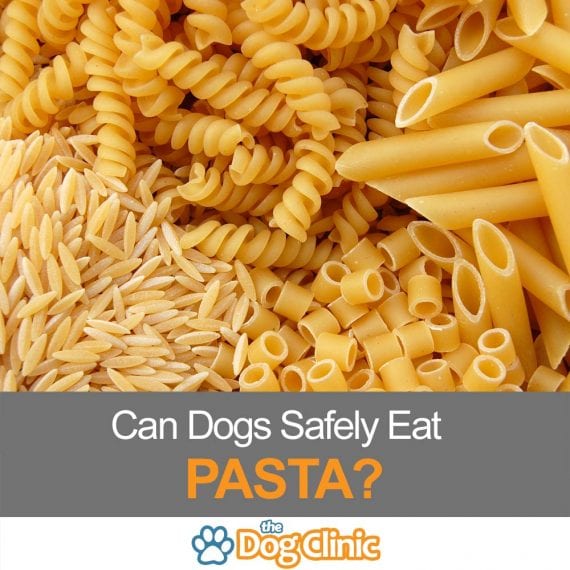 Cooked pasta without sauce is unlikely to be harmful to a dog, unless your pet has a wheat or gluten intolerance. That doesn’t mean pasta is a healthy ingredient to add to your dog’s diet though.

Plain pasta is made from dog-safe ingredients, so it’s generally fine for a dog to eat.

This doesn’t mean your dog should eat it though. Pasta is a carb-dense food that doesn’t provide much nutrition. If eaten too frequently, it could lead to weight gain.

There are also situations where pasta could be harmful. Dogs with wheat or gluten allergies, for example, shouldn’t eat pasta unless it’s gluten-free. A pasta dish that’s smothered in sauce is also likely to be dangerous to your furry friend, as it could contain toxic ingredients.

In this article, I’ll explain the pros and cons of allowing your dog to eat pasta in further detail.

Most pasta is made from doggy-safe ingredients, such as eggs, flour and water. This means that popular pasta types such as plain noodles, spaghetti, penne and macaroni should all be fine to eat.

In fact, vets sometimes recommend whole grain pasta for dogs that have an upset stomach. Boiled chicken and brown rice are often best for this purpose, as they are low in fat and fiber, but pasta is sometimes suggested as an alternative starchy base.

It won’t work for every dog though. If your pooch doesn’t eat starchy meals – perhaps they’re fed a raw diet – then the introduction of a lot of pasta could make things worse. Sudden changes in diet can cause dogs to suffer from an upset stomach.

A Warning About Allergies

Typically, pasta flour is made from wheat. This is one of the most common allergenic foods in dogs.

Wheat allergies can trigger a variety of symptoms, often involving gastrointestinal upsets and skin flare-ups. Your dog may suffer from skin inflammation, hot spots or rashes. They might also start to lick or scratch excessively, which can lead to ear and skin infections.

You should avoid pasta entirely (unless it’s a gluten-free variety) if your dog has a wheat or gluten intolerance. Even if your dog doesn’t have a diagnosed sensitivity, a sudden itchiness or other symptoms could be due to an allergic reaction.

The severity of wheat sensitivity can vary a lot. Some dogs only need to eat a small amount for an immediate flare-up to occur. Others may eat pasta for a significant amount of time before symptoms develop. Clinical signs of an allergy can take up to 14 days to manifest, which is why diagnosis is often difficult.

Is Pasta Bad for Dogs?

There’s a big difference between “non-toxic” and “healthy.” So, is pasta unhealthy for dogs?

As mentioned earlier in the article, small amounts of pasta probably won’t do any harm to a dog who doesn’t have an allergy.

There’s an argument, however, that as dogs are descended from wolves, starchy carbohydrates like rice and pasta should be avoided. Wolves need a predominantly meat-based diet to thrive.

There is some truth to this, and your dog’s diet should be high in proteins and fats to meet their energy needs. Research shows, however, that dogs have evolved digestive systems that can cope with complex carbohydrates.

Giving your dog a lot of pasta on a regular basis isn’t recommended though. It’s not a food that is high in nutritional value, and it’s relatively calorific. Your dog could end up putting on weight. Focus instead on dog food groups that are healthier and more nutrient-dense.

Whether your dog is being fed a commercially prepared, raw or home-cooked diet, the priority should be on ensuring it’s balanced and nutritious. If you’re unsure, taking advice from a qualified canine nutritionist can be beneficial.

Is There Any Nutritional Benefit to Pasta?

Pasta might not be recommended as part of your dog’s daily diet, but it does have some nutritional value. The benefits vary depending on the type of pasta and how it was made.

Most pasta is refined during the production process. Although some nutrients are added back in, these varieties tend to be low in fibre and high in calories.

Whole grain pasta contains all parts of the wheat kernel and has a higher fibre content and fewer calories. They also contain more beneficial vitamins and minerals, like manganese, selenium, copper and phosphorus.

What About Pasta Sauce and Toppings?

If you’re giving your dog small quantities of leftover pasta now and again, it’s best to put some aside before you add sauce or toppings.

Garlic and onions are common additions in pasta sauces. Both of these ingredients are toxic to dogs and can cause serious health problems.

Being fed too much salt can also be a problem for your dog. It can result in your dog becoming dehydrated, and dogs with renal problems are at greater risk.

Pasta sauces can also be rich with a lot of high-fat ingredients. The popular carbonara sauce, for example, is usually full of cream, cheese and butter. If your dog isn’t used to eating these, or they’re lactose intolerant, it could result in an upset stomach.

Regularly feeding a dog high-fat ingredients like this can even trigger a condition called pancreatitis. This can cause extreme gastrointestinal problems. Cases can be acute or require life-long management, and chronic cases can be life-threatening.

Occasionally feeding your dog cooked pasta without sauce shouldn’t be a cause for concern. Dogs are able to digest complex carbohydrate sources such as spaghetti, noodles, and other forms of pasta. The exception is if the dog has a wheat intolerance or allergy.

Feeding large quantities of pasta isn’t recommended though. Pasta, especially the refined variety, isn’t a nutritious food and is pretty high in calories. It could result in unhealthy weight gain.

Pasta sauces also shouldn’t be given to your dog. They often contain toxic ingredients, such as onions or garlic. Many sauces are also high in unhealthy additions, like salt and sugar.