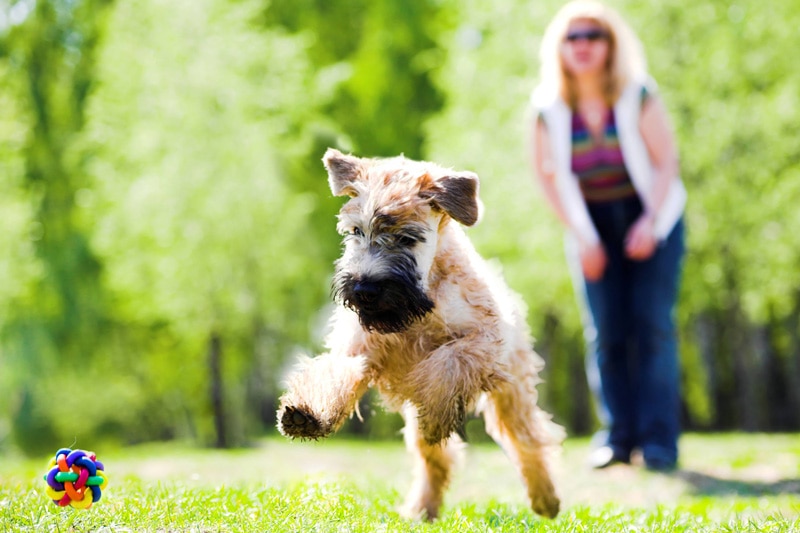 The world of dog training can be a confusing place. If you’re having trouble distinguishing fact from fiction, here are seven common myths that just won’t go away.

The internet is great for learning about dogs – but it’s also the ideal medium for spreading myths about training. This isn’t helped by every trainer and owner seeming to have a different opinion about what “works.”

This is partly because dog training isn’t an exact science. Unfortunately, there’s also plenty of bad advice out there.

With that in mind, here are seven of the most common dog training myths to avoid.

1. Puppies Shouldn’t be Trained Until They Are Six Months Old 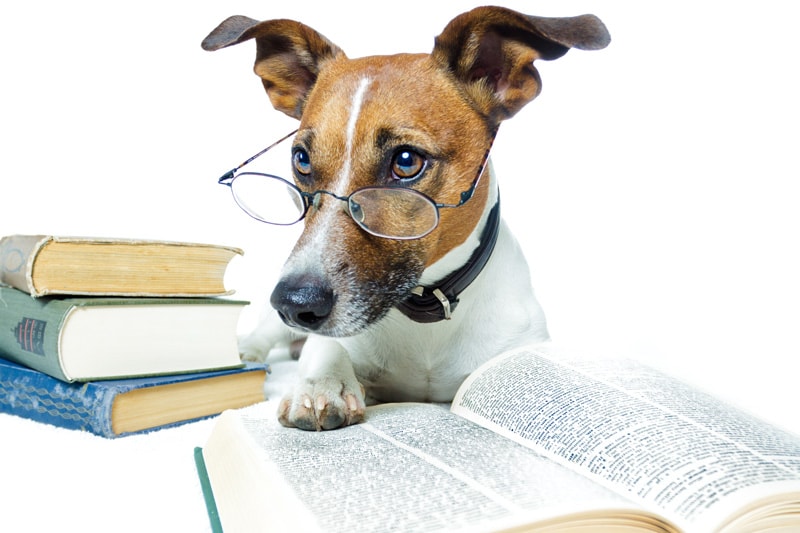 According to the APDT, this myth dates back to when using a choke chain was the “only” way to train a dog. These corrections were so severe that a puppy physically couldn’t be trained until it had developed more strength.

With positive training techniques and modern collars, there’s nothing stopping you training a puppy at eight weeks old or even younger. Keep the sessions short – puppies have a short attention span – but the sooner you start training the better.

If you’re not sure where to start, the “look” command is a great choice, as it’s hard to train others until you can reliably get your dog’s attention. Other puppy commands include sit, come, wait and give.

2. You Must Dominate Your Dog to Train Him

If you haven’t heard of the dominance theory, here’s a brief outline:

As dogs are descended from wolves, the theory states that they must show similar pack behaviours. Scientists studied wolves in captivity and found that they had a hierarchy based on the “Alpha” wolf, and decided this also applied to dogs. Therefore a human must dominate a dog and show it is “pack leader” or the dog won’t listen.

There are several problems with this theory. The biggest is that dogs are not wolves. It sounds obvious, but it’s a point that many “old school” trainers miss.

Thousands of years of selective breeding have created an entirely different animal that’s adapted to living with humans. The first domestic dogs were likely bred over 15,000 ago, and ever since then we have been selecting for traits such as companionship, obedience, alertness to strangers and other tasks. To think this hasn’t greatly changed a dog’s social instincts is hard to fathom.

The original study also used unrelated wolves that were held in captivity. These wolves fought over food – but even wolf experts discredited the study as it was held in an unnatural environment. Wild wolves act differently and rarely fight with other members of their pack over food.

Modern training should be about communicating with the dog in a positive way. Old-school techniques such as flipping a dog on its back, pinning it down or using painful collars aren’t just unnecessary – they can also ruin your dog’s trust.

3. My Dog Looks Guilty – So He Must Know He’s Done Something Wrong 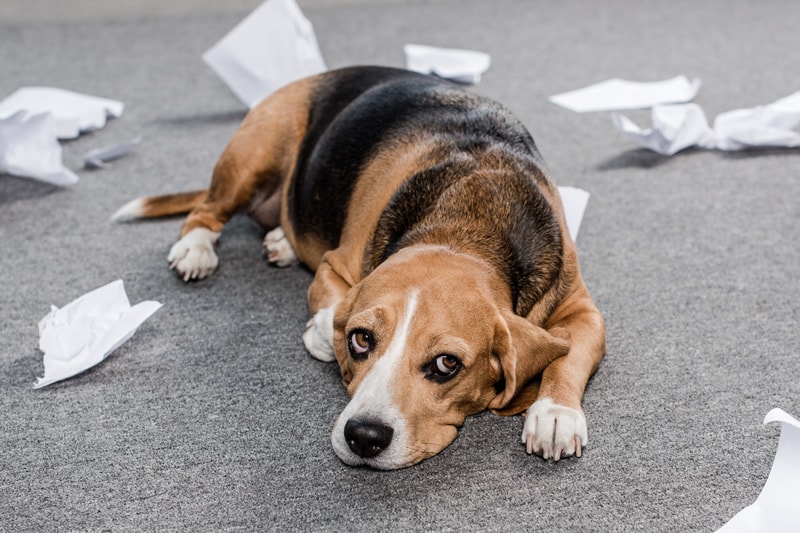 Whether dogs can feel guilt is up for debate, but that “guilty” look your dog has after stealing treats or ripping up a toilet roll probably isn’t because he’s done something wrong.

In a study at Barnard College in New York, researchers found the guilty look depended on whether the person expected to see it or not. The only changes in the dog’s body language were due to the human’s reaction – not because they realised they had done something wrong. The dogs may also have learned to look nervous as an appeasement behaviour when they realise the human was angry.

4. Giving Treats While Training is Bribery

I’m not sure where this myth started, but it’s clearly not true. Many positive reinforcement trainers compete at events that don’t allow food, but this wouldn’t be possible if the dog always needed to be “bribed.”

When used correctly, treats can speed up the training process and make it more fun for the dog. Once the behaviour has been learned, treats can be phased out slowly and randomly (dogs love “gambling” for treats).

With that said, you shouldn’t rush the process of removing treats from a command. Start by missing out the occasional treat, then build up until the dog rarely gets a treat.

Keep in mind that dogs find it hard to generalise commands. If you’re training in a new environment with lots of distractions, you may need to temporarily bring back treats until the behaviour is re-learned. 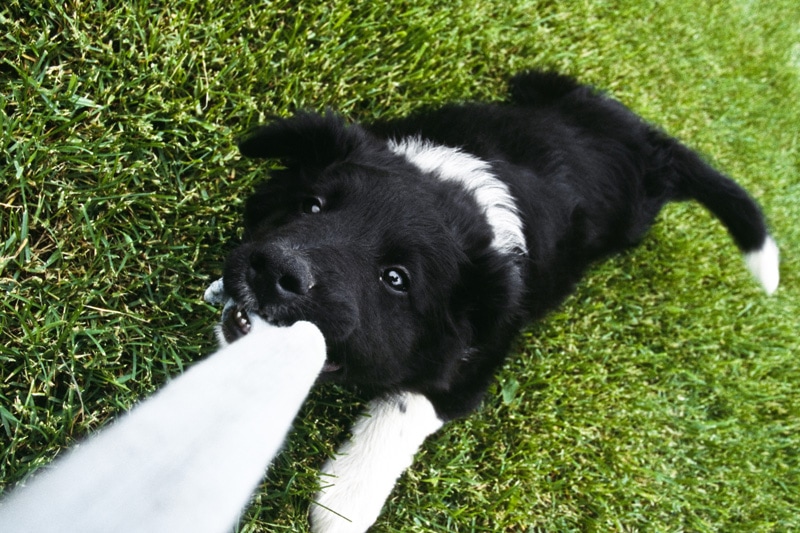 Tug of war is one of the best games you can play with a dog, so there’s no need to be scared of it. It’s important to know how to play “properly” though.

There should be two rules when playing tug of war:

As long as you follow these rules, tug of war can be a fun game that many dogs love. You can also use it as an alternative reward when training.

6. My Dog is Stubborn on Purpose

If your dog seems to only “get” a command when he feels like it, or just won’t perform a certain behaviour, it might seem like he’s being stubborn.

There’s nearly always a reason why a dog can’t learn a command though. Perhaps the command is too complex and you need to take a different approach. Maybe the dogs hasn’t been rewarded properly when it does the right thing, so it’s confused about what it should do. The way a trainer communicates a command can also cause confusion.

None of these things mean that the dog is stubborn. In many cases, all that’s needed is a slightly different approach and patience.

Remember that dogs often need to be “re-trained” when entering a new environment. Just because your dog has perfect recall at home doesn’t mean he’ll listen at the park. This isn’t stubbornness, it’s just that dogs have difficulty generalising.

7. My Dog Does “X” Because He’s Dominant

I’ve already talked about the myth of the “Alpha” human. But many people also still believe that when a dog does something wrong, such as jumping up or showing defensive behaviour over a toy, it’s because he is “dominant.”

Dogs aren’t in a continuous battle with their human companions to be dominant. If a dog is doing something you don’t want, stop worrying about dominance and develop a training plan that involves positive reinforcement.

One of the most stubborn myths about dogs is that they can only learn when young. Anyone who has trained an older dog knows this isn’t true – but the myth isn’t going away any time soon.

Dogs love training at all ages, so it’s a shame when people believe they can’t learn past a certain age. Training an older dog can also be a great way to keep him mentally active, which is just as important as physical exercise.