Skip to content
This post contains affiliate links, and we will be compensated if you make a purchase after clicking on our links.
By Rebecca Morello | Last Updated: October 25, 2021 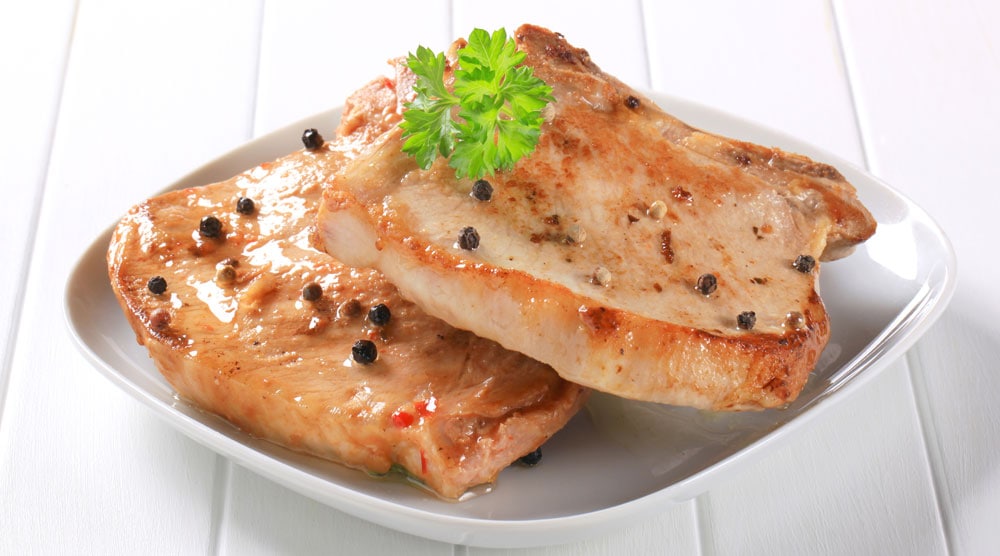 Dogs naturally eat meat, so most owners don’t question which types are healthiest – especially when a variety of meats are included in commercial dog foods. But is pork bad for dogs? And can it even be dangerous? Let’s find out.

Dog foods containing pork are all the rage at the moment. Pet stores stock everything from from pork biscuits to pigs ears, so it’s not surprising owners assume this type of meat is healthy.

Despite the wide range of products, there is debate over the healthiness and safety of feeding pork to dogs. This can be confusing for dog owners who need to know what to feed their pup.

Plain pork is safe for dogs to eat in moderation, as long as it doesn’t have seasoning, spices or sauces. This is because many seasonings include substances such as onion powder and nutmeg which are highly toxic to dogs. The occasional pork treat is probably fine too.

That doesn’t mean pork is necessarily healthy though. The type of fat present in pork can be hard for a dog’s digestive system to handle, which may leads to gastrointestinal problems. It can also cause pancreatitis.

Raw pork should not be consumed by dogs as it may contain a parasite that causes trichinosis. Pork bones are dangerous as they can splinter inside the dog. The high salt content in bacon and ham can also be dangerous for dogs.

Is it Safe for Dogs to Consume Pork?

It is safe for dogs to eat pork, but only when certain conditions are met.

Plain cooked pork without any seasoning is safe for dogs to eat – although they shouldn’t eat too much as the meat contains high fat content (more on that later).

If you plan on giving your dog leftovers, make sure it hasn’t been coated in seasoning, sauces or spice rubs. While the pork itself might be safe, seasoning often contains substances that are dangerous for canines to consume. These include nutmeg, garlic or onion. BBQ sauces should also be avoided, as they are often high in salt and contain garlic.

The occasional pork treat also isn’t likely to cause any harm – but you should be wary of feeding too many treats with high salt and sugar content (see the section on ham and bacon below).

What About Raw Pork or Bones?

Feeding your dog raw pork is definitely a bad idea. Uncooked pork can contain a nasty parasite called trichinella spiralis larvae. These parasites live in the muscles of infected animals and can be passed to both humans and dogs. Once infected, a dog with trichinellosis can suffer from a range of symptoms including vomiting, pain, diarrhoea, fever and lethargy.

Cooked bones from any animal, including chicken, should never be fed to your dog. When cooked, bones become brittle and dry. This can cause them to splinter as your dog chews them, leading to internal damage and choking. Splintering is less likely with raw bones but still possible. For this reason, we recommend buying a special dental chew treat that offers the same benefits as a bone without the danger.

Can Dogs Eat Ham and Bacon?

Unfortunately, the answer is no. Preserved pork foods such as ham, bacon and sausages are high in salt. This isn’t just bad for a dog’s blood pressure and kidneys, but can also lead to increased thirst and potentially bloat.

Excessive salt consumption causes your dog to become dehydrated. If he drinks too much water, it can cause the stomach to fill with fluid and gas, leading to pressure on surrounding organs. Bloat can be fatal, which is why you should avoid feeding dogs preserved pork with high salt content.

The WHO also found in 2015 that processed meats may be linked to certain types of cancer. While this report was for humans, the effect may be the same for dogs.

How Often Can I Feed My Dog Pork?

Cooked, plain pork is fine in small quantities, but it shouldn’t make up a large part of a dog’s diet. This is because pork has a high fat content which increases the risk of pancreatitis.

Pancreatitis is a condition where the pancreas (an organ near the stomach responsible for digestion and regulating blood sugar levels) becomes inflamed, causing symptoms such as vomiting, pain and fever. It can be life threatening – especially if symptoms are not picked up quickly.

On the other hand, there may be some potential benefits to feeding pork. These include:

Despite these advantages, the high fat content of pork means that there are far healthier alternatives, including chicken.

Can Dogs be Allergic to Pork?

A pork allergy is possible in dogs. For this reason, give your pet a small amount the first time he tries it. Check that he doesn’t suffer from a reaction before feeding it to him again. While it can be tempting to assume your dog will be fine with pork, it’s actually one of the most common meat allergies with lamb and rabbit.

Cooked plain pork without any seasoning is usually not dangerous for dogs to eat. The high fat content can be difficult for dogs to digest, however, so can cause gastrointestinal problems or even pancreatitis if eaten too often.

Raw pork, bones, seasoning/spice rubs, sauces and preserved pork (such as ham and bacon) all can be dangerous though. Raw pork, in particular, may contain dangerous parasites.

With the wide range of dog foods available today, we don’t think it makes sense to regularly feed pork unless advised to by your vet (perhaps because of allergies to other protein sources). The high fat content carries a risk of indigestion and even pancreas inflammation, which isn’t the case with alternatives such as chicken. Chicken also doesn’t have the potential carcinogenic effects of red meat.

About The Author: Rebecca Morello

Rebecca is an IMDT-accredited dog trainer, qualified assistance dog trainer, and previously worked for a major canine adoption organisation. She also has a passion for animal welfare. In her free time, she loves taking long walks with her cavapoo and husband.