Why Does My Dog Lick The Couch and Other Furniture? 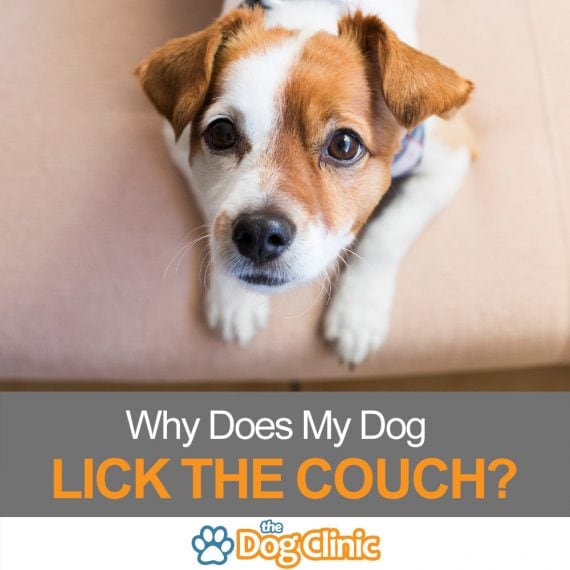 Have you noticed your dog licking the couch or other furniture? In this article, we’ll discuss some of the most common reasons for couch licking, along with tips for preventing it.

While licking a couch might seem like strange behaviour, the occasional lick is usually nothing to worry about.

Unlike humans, dogs often use taste to explore their environment. When it comes to couch licking, the most likely explanation is that he’s found some spilled food. Your dog may even enjoy the taste of the couch material!

Compulsive or obsessive couch licking, however, could indicate a behavioral or health issue. Reflux, boredom, and stress can all cause a dog to lick objects more often than normal, so it’s not something to be ignored.

This article explains some of the reasons why your dog might lick the sofa and when it could be a cause for concern.

Why Do Dogs Lick?

Before we discuss why your dog licks the couch, it’s important to understand why dogs lick at all.

Licking is an instinctive dog behavior, but it can mean different things depending on the context. Some of the most common reasons for licking include:

Note: If your dog is showing signs of compulsive licking, you should get a vet checkup and talk to a canine behaviorist.

While couch licking is often nothing to worry about, there are times when it’s a symptom of an underlying behavioral or medical issue. If it becomes frequent or excessive, it shouldn’t be dismissed.

If you’re struggling to understand why your dog is licking the furniture so much, the five reasons below may help you narrow down the issue.

If your dog is excessively licking the couch, this could be a sign of an underlying health condition.

It’s always a good idea to observe your dog’s body language and behavior for signs of pain or other symptoms. Are they lethargic, defensive, or panting excessively? Any changes to his normal behavior could indicate a health issue. Getting a vet check-up to rule out this possibility is recommended.

Some health problems associated with excessive licking are outlined below, but this list is by no means exhaustive:

When contacting your vet, it’s important to give them as many details as possible. When did the licking start? Does it usually happen at certain times of day? How long does your dog lick the sofa? Is it easy to redirect the behavior or is your dog persistent? And are you noticing any other unusual behavior or symptoms? It may even be worth videoing the licking for your vet to see.

The more information you can provide, the easier it’ll be for your vet to make a diagnosis.

Dogs who are anxious may lick objects in an attempt to soothe or relax themselves.

Studies have shown that the act of licking can release stress-relieving hormones called endorphins. This means that licking the couch could actually help your dog to feel better.

It’s important to understand what may be triggering your dog’s stress, so you can help them to feel more relaxed. Furniture licking can become compulsive if the underlying stress isn’t resolved, so it shouldn’t be ignored.

Some questions that may help uncover the root cause of stress include:

Removing the triggers, or helping your dog associate them with positive things, can reduce your dog’s anxiety.

Depending on how serious the problem is, you may want to reach out to a professional dog behaviorist. They’ll be able to help you with a desensitisation and counter-conditioning programme. This can help to change your dog’s response to these triggers from a fearful one to positive.

If your dog isn’t getting enough exercise or mental enrichment, licking the couch may become a way to keep themselves occupied. This can develop into a habit if it makes your dog feel happier.

Making sure you offer plenty of physical and mental stimulation won’t just help prevent licking. It can also prevent other problem behaviors from developing, while keeping your dog healthy and content.

Regular daily exercise and plenty of human interaction are the best ways to keep your dog happy. Puzzle and interactive treat toys can also be a great investment.

If your dog only licks the couch occasionally, he may have just found some food. While you might not realise you’ve dropped a few biscuit crumbs or spilt some sauce, your dog’s excellent sense of smell won’t have trouble sniffing it out.

Remember, the taste of spilt food can linger long after your dog first finds it, so they may return to the same spot later. You might need to use a stain and odor remover to get rid of the tempting smell (just make sure it’s suitable for the couch material!)

5. Likes The Taste or Texture (Especially Leather or Suede)

Some dogs might enjoy the taste or texture of the sofa. Leather and suede can be particularly appealing, as these materials have a distinctive taste and smell.

If you think this is what’s causing the issue, redirecting the licking to a more appropriate toy could be helpful. You could even buy one with a similar smell, taste, or texture.

An occasional lick of the sofa isn’t something to be concerned about. In many cases, the dog has just found a crumb or patch of tasty spilt food.

If your dog is regularly or obsessively licking the sofa, however, the first step is to schedule a vet checkup. It’s important to rule out an underlying medical condition.

Stress or boredom can also cause couch licking. For dogs with anxiety issues, seeking help from a qualified dog behaviorist is always a good idea. It’s also essential to make sure your dog gets enough mental stimulation, physical exercise, and human interaction.